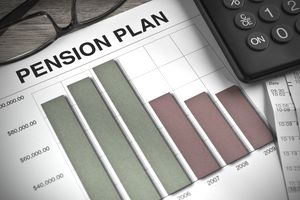 The way pensions have been mismanaged and are currently designed will either bankrupt both the state and future public retirees or kill services provided by the state including education funding and still bankrupt future public retirees.. We must change the Illinois Constitution to allow an immediate change to the retirement benefits of all people in public service in Illinois. This change must protect the retirement of current and soon to be retirees. It must also ensure the well-being of future retires. Also, it must do this with minimal disruptions in services given by the people in Illinois to the government of the state to provide. Finally, it must be done without bankrupting the people whom the government is supposed to protect.

It is no secret that the spending on pensions has increased dramatically. However, before researching, I had no idea that pensions are now 25% of the General Fund. That is 25% of the budget for less than 8% of the population. Something else I didn’t realize is that the folks on Tier 2 are in danger of getting less out of their pension than the put into it.These are both serious problems. They are a result of the state government overpromising in the 90’s, overreacting in the 2000’s and failing to take responsibility throughout. The government promised very generous pensions to Tier 1 employees that it couldn’t afford. So, it came up with a “ramp up” spending plan that would only serve to bankrupt the state or diminish services. Then, after years of not funding the pension fund, the government scaled back the pensions for new employees to the point where their plan may not meet federal law. Then, in 2013, they tried to implement a hybrid plan that would change the pensions for current pensioners, current employees and future employees. Unfortunately, the Illinois Supreme Court said that the Illinois Constitution forbids changing current pensions.

Ok. That is the history. So, what can we do? Well, to figure that out, we can look at what states that have continually done well and are improving greatly have done. According to PEW Charitable Trust, the three states with the healthiest pension plans are Wisconsin, Tennessee and South Dakota. The three characteristics that distinguish these states beyond having solvent pension funds are that they fully fund the pension, even in off-years for Wall Street, share the risk between the state and employees and, in the case of South Dakota, pensioners and the COLA they pay is 2% less than the COLA they plan for when amortizing. The most improved state, West Virginia, improved by paying enough to exceed its amortization schedule AND pay down the backlog.

Looking at the history and what West Virginia did, we have to take several steps. We need to fund to the actuarial approved limit. We need to change the Constitution. We need to pay down the debt. First, we need to take out a loan to pay down the backlog completely. This will stop the bleeding. Second, we continue funding to the actuarial limit. This should be much less and more consistent with the loan catching us up. Finally, and most importantly for Tier 2 employees, we need to change the IL Constitution. To do this, let’s look at what the Constitution says: “Membership in any pension or retirement system of the State, any unit of local government or school district, or any agency or instrumentality thereof, shall be an enforceable contractual relationship, the benefits of which shall not be diminished or impaired.” After “impaired.” I would add: “unless determined by a neutral panel that the state is in danger of insolvency or cannot provide services at an acceptable level. At that point, the benefit of current employees at 5 years or more away from pension age can be modified once, but cannot provide less benefit that Federal Social Security.” This will allow the state government to institute a phased in hybrid plan.

Here is a plan I think might work. However, I am not an expert and do think that the plan should be determined by a non-partisan panel made up of experts in retirement programs. Now we continue to my plan. First, all current pensioners and employees within 5 years keep their plan. Second, employees with more than 5 years until retirement will be on a hybrid plan. For 5 years – 10 years out, the base will be the same as Tier 1 benefits, but the COLA is phased out of the Defined Benefits (DB) part of the plan. The phase out will be from 3% at 5 years to 0% at 10 years. However, the employees will contribute as much as they desire into the Defined Contribution (DC) part of the plan. Second, the DB decreases from Tier 1 levels to what Social Security provides + 5% of what Social Security provides as the State increases its match what the employee contributes to the DC. After 15 years, the DB equals 105% of Social Security and contributes its maximum amount to the DC. The state matching of the DC will be contingent on the state’s economy, either as following the GDP of the state or the Consumer Index.

To conclude, our pension system is broken. This can be seen in any metric out there. If we can learn from states that have healthy pensions or, especially, states that have improved the health of their pensions, we can repair the retirement system for state employees and taxpayers. This will quickly lead to more money for state services and for schools from the state. This in turn will lead to lower property taxes and, hopefully, a significantly smaller tax burden in the not too distant future.