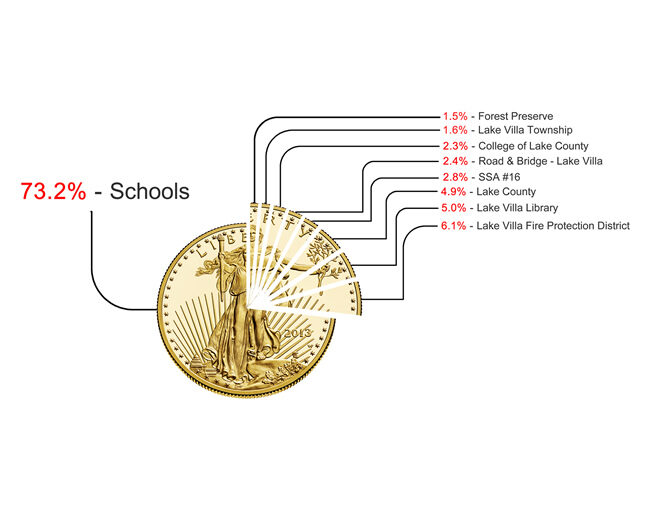 There is no question that Illinois has a serious problem with taxation. We are ranked 50th in overall tax rate and 42nd in overall tax burden by Wallet Hub. There also isn’t a question that these high taxes are starting to hit our economy as we rank 30th in debt: GDP ratio by U.S. Government Debt. On top of that, Lake County has the 2nd highest property taxes of any county in the nation. But why are our property taxes so high? The problem of sky high property taxes is based on Illinois history and a state legislature that doesn’t want to make hard decisions. In order to fix this system, we need to take a close look at these two problems.

First, the tax structure of Illinois was developed when the state was founded and has had only minor changes since. Property taxes were, and still are for the most part, a nonvolatile source of revenue. So, to protect schools, the funding for K-12 education was based almost solely on property taxes. The benefits to this are a stable source of revenue and that the values generally rise over time. This was fine for the 1800’s when almost all wealth was put into property and generations lived in the same house. Unfortunately that isn’t the case today. Now, families are dispersed throughout the United States. Also, our wealth is in investments more than in our property, so property wealth is not growing at the rate it has in the past. Couple this with the fact that schools were mainly private or parochial in the 1800’s and that they are now nearly all public. So, to keep up with costs, schools and other taxing bodies are forced to increase the tax rate. All of this creates a situation where we are effectively renting our homes from the government. So, senior citizens are being forced to either continue working or to leave the state because of rising property taxes that are out pacing their retirement accounts. Home owners are forced to pay for their house twice to own their homes. Even with all the astronomically high property taxes, K-12 schools are at best being funded inequitably and at worst not funded enough to allow them to educate our youth.

Obviously, the system is broken beyond a simple repair and has been for a long time. So, why hasn’t it been repaired? Well, there are several reasons. First, there has been one-party control of the legislature since 2002 with a full trifecta from 2003-2014 and this last year. Michael Madigan, the defacto leader of that party and head of the Illinois House also is with a law firm that makes a good chunk of its money appealing property tax assessments. So, it is unlikely the legislature and governor will change the way we assess property taxes and do appeals. Also, the party sees much of its support come from unions. This has led to public worker pensions increasing from 9% of the budget to 25% of the budget in 10 years. So, the state is unlikely to increase its funding to schools since that funding would be at the mercy of pension funding which is always growing. Therefore, the schools which already collectively rely on property taxes for over 60% of their revenue will have to increase their tax rates.

So, what can be done? Well, pension funding is such a large issue that it must be tackled separately. That said, the state can impose several common sense reforms that will lower property taxes significantly even if pension reform doesn’t happen.

First, we can look for help from what is done in states where the financial health is good. In looking at the tax structure of the top 10 states in financial health, it looks like states that use sales tax more and income tax and property tax less are generally in better health. Illinois follows that pattern, meaning we use property taxes way too much and sales tax not enough. So, it looks like changing our tax structure to match those states will not only lower property taxes but also help our state’s financial outlook. If we want this tax structure change to work, I think we should start by allowing school districts to start implementation of a sales tax with a commensurate decrease in their property tax rate.

Second, in looking at all other states, we can see that we have far more taxing bodies than other states. In fact, we have the most total, general and special taxing bodies. This leads to a lot of overhead. There will be more buildings and more upper management. So, the cost is higher. Therefore, we can benefit from consolidation. However, this also keeps the taxing districts closer to the taxpayers, which give the taxpayers more control over their money if they take the time to let the governing bodies know their ideas. Also, different taxing districts tax at different rates and allow tax payers a different amount of control. Finally, some taxing bodies, like school districts, get better as they get bigger up to a point then get worse. So, consolidation is a complex issue. It needs to be done. Period. However, it needs to be done in such a way that it doesn’t diminish services or control significantly while providing the maximum savings possible. It will look different for every taxing body. Finally, I think we should start with the largest taxing bodies by tax rate, the schools, not at the smaller end, townships.

Finally, we need to make our assessments and appeals more equitable. This will mean changing the way we assess the Equalized Assess value of our property and how tax payers can appeal that assessment. From what I understand, the EAV starts with looking at sales of similar properties to determine the values. Also, people can appeal based on specific differences between their property and other similar properties due to the fact that that isn’t looked at in the original assessment process. So, I think we should look at making that a part of the original assessment process. To do this, we should invest in hardware and software so that the assessors can easily sift through data to determine assessments more quickly and accurately. As far as the appeals process goes, we need to advertise the window for appeals better and make the process more standardized so that the average tax payer can file an appeal without needing the help of a lawyer. The options for advertizing are many: a notice of the window can be sent with the assessment notice; the county can put the notice on their website and Facebook page; state legislators, house and senate, can also advertise to their followers on Facebook and on their web pages, and many more avenues. Finally, remove any negative consequences of appealing. If it is found that the property should have been assessed higher, notify the person making the appeal but do not increase the assessment.

So, property taxes are high. They will remain high until we can work out what to do about pensions. However, as shown, there are steps we can take to start lowering them and put ourselves in a good position for when we do solve the pension crisis. We can change the tax code so that all local bodies have some reliance on sales tax while decreasing their reliance on property tax. We can make sensible consolidation of taxing bodies available to tax payers. Finally, we can make the assessment and appeals process more equitable.